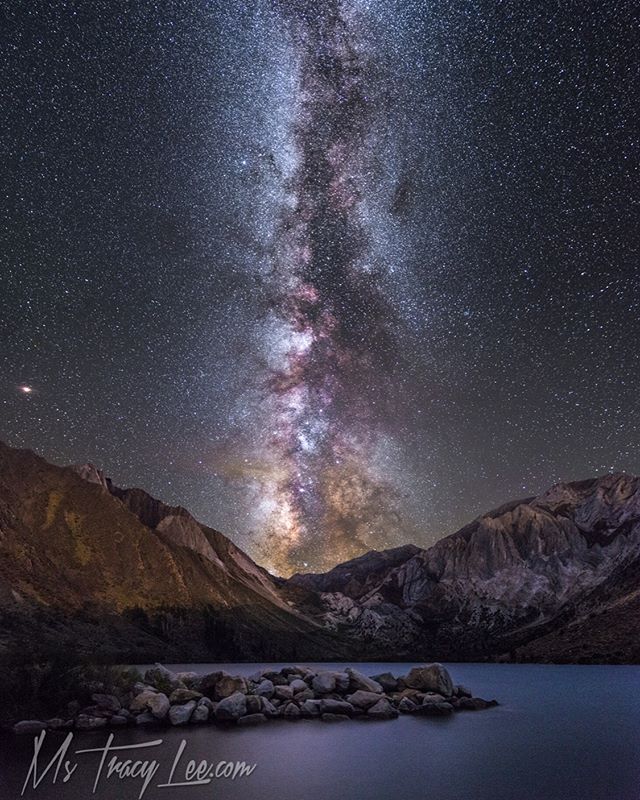 Photo Caption: So earlier in 2018, I took off to the Eastern Sierras to meet up with @ryantoswald & @whiskeybowen… The weather was questionable, and the wind was atrocious and we ended up here lake side.. well I was standing on some rocks and had used my gear bag to weigh down my tripod and then turned my back.. two seconds later the entire set up had blown into the lake… without hesitation, I jumped in after it and saved all my gear from sinking, but everything, all my lume cubes, intervalometers, batteries, and more were wet. At some point during all of this, my case of memory cards flew out of my pocket and disappeared into the abyss. Luckily I had some extra clothes to change into in the car and started stripping down to my skivvies out there on the rocks while the guys got me dry stuff to wear.. I’m fortunate that my camera was not attached and didn’t go swimming, so my night wasn’t ruined. We decided that on the rocks was a poor place to set up and moved to a more stable location to wait out the clouds and hope for clear skies…
—-
We got them and I was able to shoot 4 images for the foreground here horizontally, and then 8 Images and 14 images stacked for the horizontally oriented images but vertical pano of the sky. I can’t say why I didn’t have a consistent number of images but I’m assuming the wind and the cold and clouds prior to this had a lot to do with it… just thrilled that the image still came out pretty good in spite of the drama of the evening lol!!
—-
ISO 10000
Foreground 4 shots @ 30 seconds
Sky 8 and 10 shots @ 10 seconds
F 2.8
@tokinausa 16-28 @ 28
@slikusa 634-CF
@canonusa 6DMK1
Processed in LR, PS & SLS
—-
.
.
.
.
.
#nationalparkgeek#findyourpark #yourshotphotographer #naturephotography #adventurephotography #landscapephotography #keepitwild #wanderout #allaboutadventures #takemoreadventures #wildernessculture #neverstopexploring #earth_shotz #big_shotz #depthsofearth #optoutside #gramslayers #exploreourearth #exploremore #northwestisbest #shootslik #teamtokina #canonusa #tracyleephotos #tokinausa #milkywaychasers #milkyway #nightphotography #teamcanon #mammoth