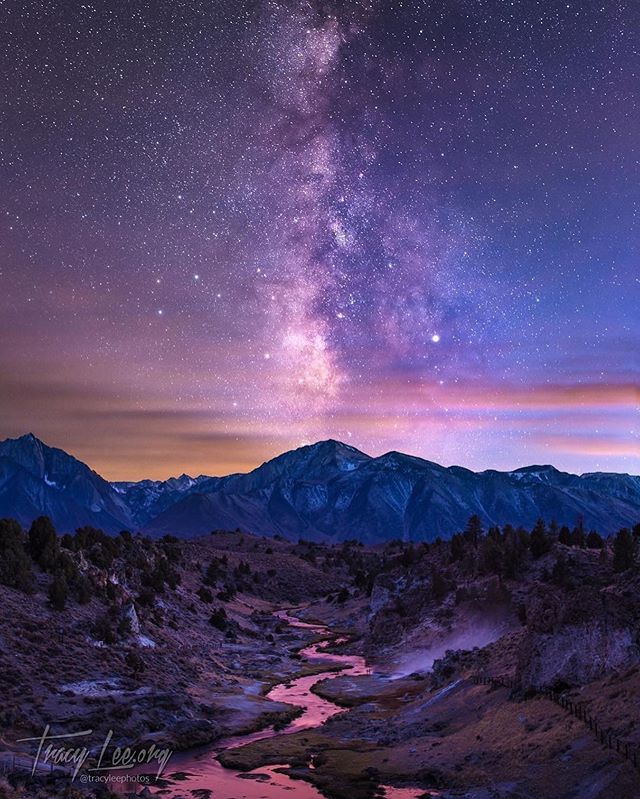 Photo Caption: One of my fave images from end of 2017 season! #FBF #FlashbackFriday
—-
Last weekend I hosted an impromptu end of season @MilkyWayChasers meet up at Trona Pinnacles with an awesome turnout; Thank you again everyone!! Since I was driving all the way to California for it, I took off a day early so that i could hit some spots in the Eastern Sierras to shoot Milky Way and Fall color before heading down to meet with the group. I had been wanting to shoot at this location since last year after @Prevailz had mentioned it to me. I had even been here a few months back with @TommyMacPhoto but we had a schedule of other spots to be at and didn’t have time to come back to shoot at night..
—
As we were driving up the 395, the skies were super cloudy but my trusty weather website, noaa.gov promised that the skies would clear up in time. I didn’t feel a sense of urgency to make it here by sunset because it was so overcast I thought for sure it was going to be a crappy sunset.. Boy, was I wrong!!! Not only was it one of the best sunsets ever, the skies cleared up JUST in time for me to get this shot of the alignment.
—
What is crazy is that I thought i had messed up this shot and was going to have to composite a later Milky Way in, or just deal with a shot that didn’t have the MW in alignment… Going back through my images, I had done a vertical pano at the exact perfect time. The sky, the upper part of the pano, was taken 15 minutes after the foreground was taken.
—
I don’t usually shoot night sky with my @canonusa 24-70 but I wanted a bigger MW so my foreground was taken at 35mm. I was kicking myself as I realized I would get trailing in my MW at the settings I wanted, so for the sky I switched to 27mm. I would have rather kept them the same focal length but I had already messed up and couldn’t go back to get the incredible foreground color this one has.
—
Sky
8 Images stacked in SLS for NR
ISO 6400
F2.8
15 seconds
@CanonUsa 24-70 @ 27mm
@SlikUsa 634-CF
@CanonUsa 6dmk1
Processed in LR & PS
–
Foreground
15 Images stacked in PS for NR
ISO 6400
F2.8
3.2 seconds
@CanonUsa 24-70 @ 35mm
Processed in LR & PS
—
#TracyLee #TracyLeePhotos Tracy Lee #milkyway #milkywaychasers